The voices of people caring for sick loved ones are important in any health care setting, but especially when these caregivers are — day in and day out — helping people in a disordered state of consciousness. They notice the subtle changes, the small shifts that could be vitally important to the patient’s treatment. However, sometimes communication between caregivers and clinicians breaks down, which is why researchers at the George Washington University (GW) are working to ensure everyone’s voice is heard. 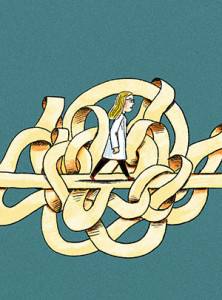 “When it comes to working with patients in disordered states of consciousness, we have a lot of ambiguity surrounding diagnosis and prognosis, and that creates challenges for communication between the clinicians and caregivers,” says Jennifer Weaver, PhD candidate in the GW School of Medicine and Health Sciences (SMHS) Translational Health Sciences Program.

Alleviating those challenges is the goal of two ongoing studies at SMHS. One study, funded by the American Institute for Research (AIR) with support from the Robert Wood Johnson Foundation, of which GW is a site, is investigating how to better measure progress for people in disordered states of consciousness through working with caregivers. The other, Weaver’s dissertation project, in a very similar vein, seeks to address the gaps in caregiver-clinician communication.

People suffering from disordered states of consciousness, Weaver notes, have experienced a brain injury that has affected consciousness, which requires both arousal and awareness. Patients may be in a coma, or they may be awake and responding to external stimuli but unable to functionally communicate. “Functionally communicating doesn’t have to be verbal,” she says. “But if there’s some way to communicate that’s consistent, like using one’s hands or eyes when they have that motoric ability, that’s one of the things we look for to say that the patient is emerging into consciousness.”

For the AIR research project, titled “No One Listens to Me,” Weaver meets weekly with two co-investigators who also are caregivers to talk about their experiences. The primary investigators of the site are Trudy Mallinson, PhD, interim associate dean for health sciences research at SMHS, and Christina Papadimitriou, PhD, associate professor of interdisciplinary health sciences at Oakland University in Michigan.

Before coming to GW, Weaver worked as an occupational therapist at inpatient rehab facilities, where she would see many patients suffering from traumatic brain injuries. She realized there existed challenges in measuring progress for patients whose injuries were considered mild but were still impacting their daily activities, as well as those who were unconscious or unable to communicate.

“I just think there’s such a need for research to facilitate better care for persons with disorders of consciousness. There’s a lot to learn; it’s an important area to explore,” she says. “[Caregivers] often do not feel heard by the medical field. And with disorders of consciousness, someone can remain in that state for more than a decade, so once the patient is discharged from the hospital, if they’re making any type of change, we may not know it right away. We need to listen to the caregiver if a change is occurring.”

People suffering from disordered states of consciousness, Weaver notes, have experienced a brain injury that has affected consciousness, which requires both arousal and awareness. Patients may be in a coma, or they may be awake and responding to external stimuli but unable to functionally communicate.

The study is allowing the researchers to hear the caregivers’ stories, learn about their experiences, and be informed about changes they’ve observed in their loved ones. “The caregivers ultimately become the experts. They’re living it day to day,” Weaver remarks.

That study also ties in with Weaver’s dissertation on how to help caregivers and clinicians better communicate about the recovery process and how to engage both in the treatment plan.

“I want to see if there are ways to create shared language between the two parties making decisions about the loved one’s condition, and maintain open lines of communication between the two,” she says.

One outcome from the two projects could be a way to better educate clinicians on how to talk with caregivers, Weaver explains. “We have assessment tools, but often I am asking, ‘How do we present that information so it’s not just the clinicians using that information to make a decision, but the caregivers, too?’ So if the patient’s making a positive change and progressing … how do you facilitate the conversation about the recovery that’s occurred, such as where to go next with the treatment and the options available? That’s the goal right now.”