Uchechi Iweala, M.D., Building on a Foundation of Big Ideas

This is a true story, begins Uchechi Iweala, M.D., a second-year resident in orthopedic surgery at the GW School of Medicine and Health Sciences. “I started reading the Wall Street Journal when I was a junior in high school as part of an economics class that I’d joined in the summer,” he says. “My dad’s a doctor, my mom’s an economist, so I was always on the fence [about my future career]. Then, lo and behold, there’s an article … that just seemed to click a lightbulb in me.” 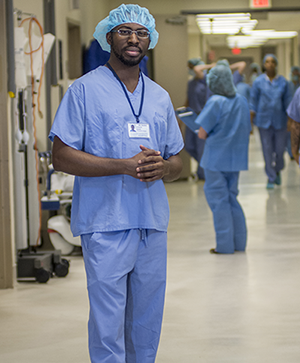 The story, which detailed the private equity buyout of a hospital corporation, called to Iweala’s dueling interests: business and medicine. “My [challenge] has been how best to marry those two aspects because, in some ways, they are very different,” Iweala says, “but I do think the synergies between the two can be very powerful.”

Those synergies have played out through his career — earning an M.D. and M.B.A. from Harvard University; serving his residency at GW; co-founding a new surgical center in his ancestral home of Nigeria; creating a novel app that revolutionizes electronic medical records (EMR) systems — and in his family. His parents and grandparents, all of whom are highly accomplished, whether in economics, medicine, or education, are a source of inspiration, Iweala says. His father, following the Nigerian Civil War, completed a residency in neurosurgery in England; his mother attended Harvard at age 19 and earned her Ph.D. in regional economic development from MIT.

“My parents [were the way] my siblings and I were inspired to work hard and try to do big things,” Iweala says. “I think we’re ultimately motivated by a passion to learn and a passion to make a difference.”

Iweala is now making his mark. With his father at his side, Iweala is leading the effort to improve health care delivery — specifically with surgical intervention and care — for Nigeria and West Africa through the development of their own modern health care facility, The Capital Health Surgical Center. The center is one of his father’s dreams, and it’s been one of Iweala’s as well since that junior year in high school. “[My dad] has been there, on the ground, building connections with doctors he knows of his generation who are also Nigerian and keen on coming back and doing something big for the country,” he says. “We’re all motivated by this; this is a genuine passion.” So far, only the recent glut in the oil market has been able to slow the project’s progress.

SignOut, a mobile app, also grew from Iweala’s entrepreneurial and altruistic spirit. The EMR system, as currently designed, he believes, is incompatible with modern technology usage, especially in emerging markets, given the world trend toward a dependence on mobile phones. “What I’ve decided is, while I’m here [at GW getting a foundation in medicine], to see how I can build an EMR that is totally divorced from any sort of desktop legacy,” Iweala says. “We’re in preliminary talks with a local Washington, D.C. hospital to actually use SignOut as a pilot IT solution for new surgical initiatives to help reduce lengths of stay [and] infection rates in surgical patients in orthopedics.”

The goal is to improve patient outcomes, Iweala says, but ultimately, his work could have a much greater impact. “I’m very excited,” he says of his ventures. “It’s motivating.”