Getting Out of Their Comfort Zone

The population of Guyana, a small country on South America’s northern coast, stands at around 800,000. The population of the country’s capital, Georgetown, is about 240,000, or 300,000 in the surrounding metro area. The city is home to one of the country’s few hospitals, Georgetown Public Hospital. Experts in specialties such as urology are scarce — you can count the number on one hand. 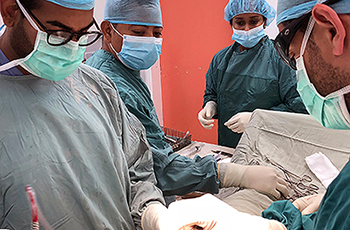 People in Guyana “have a public health system, but access to health care is delayed and limited,” explains Vikram Sabarwal, MD, a fourth-year urology resident at the George Washington University (GW) School of Medicine and Health Sciences (SMHS). “As a result, many of the Guyanese who need surgical procedures must wait long periods, often in pain as their condition deteriorates.” In November 2017, the Department of Urology and the Department of Anesthesiology and Critical Care Medicine deployed a team of attending physicians and residents to help address the backlog of urologic procedures and teach surgical and anesthesiology residents some methods and procedures to help them care for these patients. During the weeklong mission, the group had three objectives for the trip, says Daniel Stein, MD, residency director for the Department of Urology and assistant professor of urology at SMHS. The first was to help a group of patients in desperate need of care. The second was to collaborate and help train urologists in Guyana to perform surgical procedures and get them comfortable enough to train others. “They knew we were coming and were lined up for treatment,” Stein says. “We did around 20–25 surgeries while we were there for patients who were challenging to the surgeons in Guyana, or [for whom] there weren’t the resources to treat the patients.” The third objective? Encourage the SMHS residents to function outside their comfort zone. The team spent a week working in a different health care environment and experienced how medicine is practiced in another area of the globe. “It’s always good to have a sense of global perspective in terms of different resources that exist for different populations,” says Kate Hindle, MD, residency director and assistant professor of anesthesiology and critical care medicine at SMHS. “There are a lot of things that we do [in the United States] where we do have access to multiple medications and we do have access to different devices. It’s important to understand that there are many places in the world with different resources.” The mission trip was a new experience for Sabarwal, who performed his first open pyelolithotomy — the removal of kidney stones. “In the U.S., we frequently use a minimally invasive approach for many surgeries,” he says. “The facilities in Guyana don’t have many of the tools needed to perform surgeries through such an approach.” Instead, they performed a classic open urologic surgery that is no longer routinely performed in the U.S., making a large incision, opening the kidney, and taking out the stones. “At GW, we typically make a small hole in the kidney and use endoscopic instruments to crush and extract kidney stones,” Sabarwal explains. “This is a sharp contrast from the large incision needed to perform a pyelolithotomy.” The same was true for anesthesia, says third-year anesthesiology resident Harsha Nair, MD. “It was interesting to see the resources they reused in Guyana that we don’t reuse here,” he says. “Also, the availability of certain drugs — drugs that we take for granted here weren’t available there.” Nair also had the opportunity to demonstrate and teach the anesthesia residents in Guyana nerve blocks and pain management techniques that are well-suited to the urologic surgical procedures being performed. The SMHS team worked each day from 7:45 a.m. until as late as 6:30 p.m., and saw between three and five patients each day, says Nair. However, they did have the opportunity to explore the coastal city. The team spent the first and last days visiting the markets of Georgetown and taking in the unique flair of the country, which has a mix of French, Caribbean, and Indian influence. The trip was coordinated through Doctors International, a nonprofit group within the GW Medical Faculty Associates, and organized by Michael Phillips, MD, clinical professor of urology at SMHS, in coordination with the Department of Health in Guyana. Doctors International organized the first trip to Guyana in 2013 and has organized several other visits since, including a recent one to Guatemala. Sabarwal says the experience affected his perspective and goals. He now looks forward to taking similar trips and hopes to eventually assist in establishing continued aid. “It’s one thing to visit [developing nations] and perform surgeries for a short period of time,” he says. “It’s another thing to be able to set up a sustainable program in an effort to provide the native surgeons, physicians, and hospital staff the resources to improve patient care moving forward.”