At Home in the Eye of the Storm 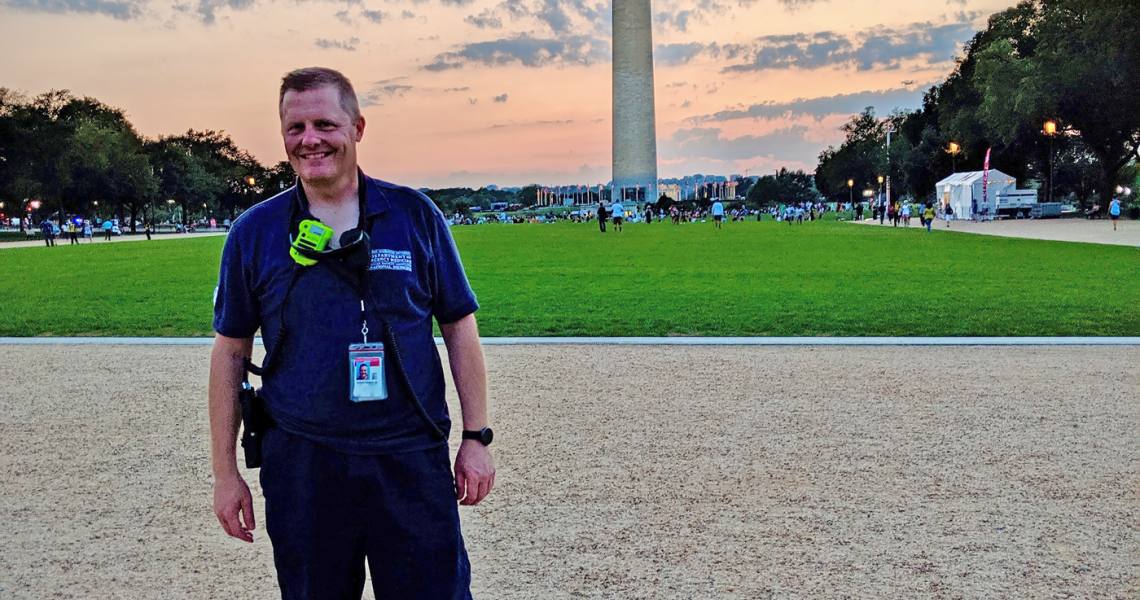 On March 28, 2005, an 8.7 magnitude earthquake rattled the island of Nias, off the northwest coast of Sumatra, Indonesia. The massive temblor came just a few months after a tsunami swept the area in December 2004. Not long after the earthquake struck, Andrew Garrett, MD, MPH, then a second-year disaster medicine fellow at the University of Massachusetts, landed on the hospital ship USNS Mercy to serve as a triage physician helping to deliver medical resources and care to the island through a partnership with the United States Navy and the non-governmental organization Project Hope.

Five months later, Hurricane Katrina, a Category 5 storm, came ashore bringing devastation to much of the Gulf Coast. Again, Garrett found himself on the frontlines following a disaster.

“I made the decision in my head at that point that I wasn’t going to take the road normally traveled for a pediatrician,” says Garrett, who now serves as an associate professor of clinical research and leadership at the George Washington University (GW) School of Medicine and Health Sciences and is the director for the Emergency Health Services undergraduate degree programs and minor. He also holds a secondary appointment in the GW Department of Emergency Medicine where he works with the Disaster and Operational Medicine Fellowship and event medicine.

Garrett first became interested in medicine by way of the emergency medical services (EMS) as a 16-year-old washing firetrucks as a junior volunteer. When he arrived at Carlton College as an undergraduate, the school did not have offer certification as an emergency medical technician (EMT), so he approached leadership for permission to start an EMT training program. They agreed.

“I had every intention of going to medical school for emergency medicine as the means to an end of a career in EMS,” says Garrett. “But, the road is never as straight as you think it’s going to be.”

While in medical school, he says, he fell in love with the challenge of caring for young children. After completing a pediatrics residency at the Children’s Hospital of Philadelphia, Garrett’s winding journey led him to become a flight physician for three years with the Children’s Hospital of Los Angeles, and then on to the University of Massachusetts where he completed an EMS/disaster medicine fellowship along with an MPH degree. Garrett believes he is likely the first person in the country to undertake this formal training as a pediatrician rather than as an emergency medicine physician.

During his fellowship, Garrett became involved as a responder with the National Disaster Medical System (NDMS), a federal program that provides disaster assistance to communities that have been impacted by disasters. Almost 10 years later in 2010, he moved to Washington, D.C., to accept leadership roles as the deputy chief medical officer and subsequently the national director for the NDMS. Before he even moved into his office in D.C., he found himself deployed to Haiti as the chief medical officer for the U.S. Department of Health and Human Services Incident Response Coordination Team during the earthquake.

His contributions to the federal government also include years as a charter fellow in the White House Leadership Development Program followed by another year serving as one of two physicians on the National Security Council, where he was the director for medical and biodefense preparedness policy under President Barack Obama.

Disaster medicine, Garrett says, forces a change in perspective about how we deliver health care. “We are typically talking about delivering care in an area where there are extremely limited resources to do so,” he explains. “It’s not as easy as just bringing the level of care you would find in an emergency department out to the field. Each incident brings its own challenges to best serving the community, whether it’s showing up in an ambulance, on a military hospital ship, or showing up in the back of a pickup truck or school bus out in the middle of nowhere.

“EMS and disaster medicine are truly adolescent areas of health care, especially in terms of research,” Garrett adds. “These disciplines represent largely untilled fields where we still have a long way to go to build the evidence base for how to deliver care in the best, safest, and most efficient way to a community after a hurricane, or to a one-year-old after a car crash on the interstate.”

Opportunities for physicians and researchers in academic and operational disaster medicine and EMS are currently undergoing a bit of a renaissance, he says. Both fields have become increasingly visible over the last few years, with EMS and disaster medicine specialists prominently positioned on the frontlines of natural disasters such as hurricanes and wildfires, technological incidents, and more recently, with spread of COVID-19 across the United States.

Garrett suggests that we currently find ourselves in a unique position where, as a society, we are collectively experiencing a public health crisis the likes of which hasn’t been seen for a century. The public is significantly more engaged and more fluent with many of the public health concepts and terminology than ever before, he notes. Despite the politics and polarization, Garrett says, this moment presents disaster medicine and public health experts with both the challenge and opportunity to engage the public in more meaningful ways about how best to weather the current crisis and emerge from the COVID-19 pandemic better positioned to respond to future large-scale public health emergencies, which are inevitable.

Early in 2020, Garrett partnered with the U.S. Department of Health and Human Services as a senior adviser with the assistant secretary for preparedness and response. Garrett was tasked with exploring opportunities to raise the bar around national-level pediatrics disaster preparedness and to help design disaster medical response capabilities for the future, again tying together his interests in pediatrics, public health, and disaster medicine.

Garrett’s career recently came full circle when he served as a frontline medical responder with the Maryland-1 Disaster Medical Assistance Team, a component of the NDMS. He deployed with a group of 35 other federal personnel to Louisiana to help build and run a field hospital after the area was hit by Hurricane Laura, a Category 4 storm that struck in the midst of the ongoing COVID-19 pandemic, posing extreme operational challenges.

“For the first time in a long time, I deployed to a disaster with exactly the same job description I had in 2001,” says Garrett. “It was so meaningful to get back to my roots and experience that same excitement from being on the ground in a disaster that brought me to this career in the first place. It’s all about helping people when they need it the most.”