The Joy of Variety 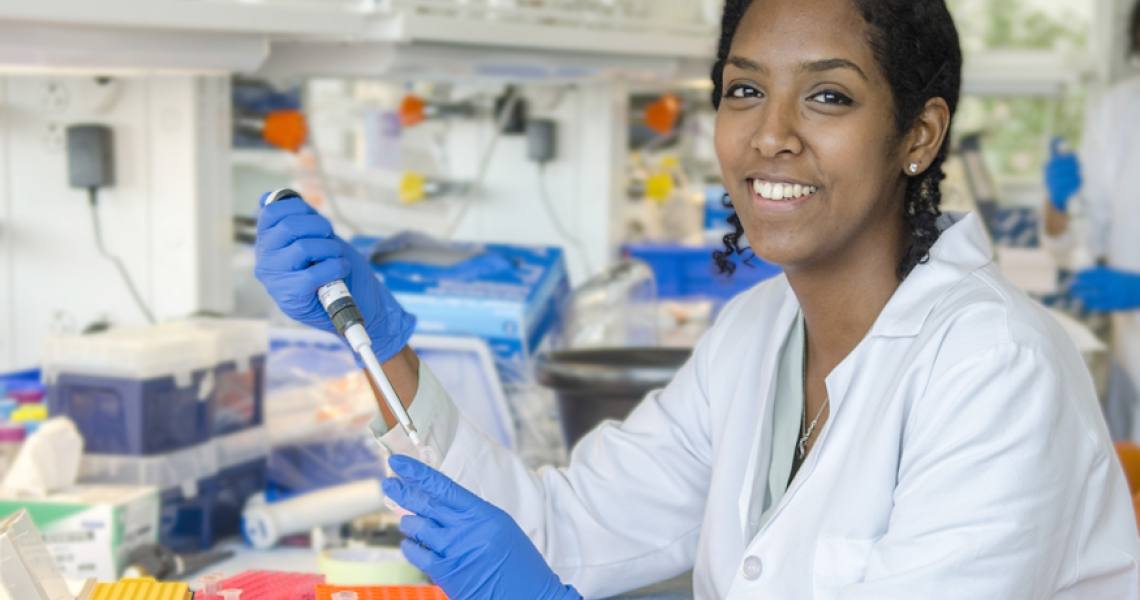 In high school, Eden Dejene, PhD ’20, who recently graduated with her degree from the George Washington University (GW) School of Medicine and Health Sciences (SMHS), didn’t realize she had a unique aptitude for science, until one of her teachers strongly encouraged her to continue to pursue her studies in chemistry.

“It started with the encouragement of that teacher,” Dejene says. “It led me to studying chemistry in college, at the University of Virginia, where I did research and realized that I had found my path.

Dejene remembers being in the lab and thinking “I could just do this every day and be happy.”

At GW, she worked in the lab of Ed Seto, PhD, professor in the Department of Biochemistry and Molecular Medicine at SMHS, and associate center director for basic sciences at the GW Cancer Center.

Dejene adds that she doesn’t want to limit herself when it comes to the research she will do in her career; there are myriad areas that interest her and she would like to pursue them all.

“I like using my basic science knowledge to learn about what is going on in different disease states. In undergraduate school I did Type 2 diabetes research, so I’m interested in that, and my project at GW focused on understanding how proteins involved in telomere biology disorders are regulated,” she explains. “I have pretty broad scientific interest; I don’t want to pick just one thing and only do that forever.”

The work Dejene conducted at GW was made possible because of support from a diversity supplement from the National Institutes of Health, and focused on how acetylation, a post-translational protein modification, can affect the function of different non-histone proteins. In particular, she studied the protein Poly(A)-specific ribonuclease (PARN) and how it is regulated by acetylation and de-acetylation; the protein has been found to be involved in several telomere biology disorders.

“Scientists have found that genetic mutations cause this protein to be absent or not function in a lot of patients and that results in a lot of the phenotypes of their disease,” she says.

“I was very flattered and it was a great honor to be accepted,” she says. “They pick candidates that have the qualities of scholarship, leadership, character and service, as well as advocacy for underrepresented communities. By being accepted, I’m agreeing to uphold those values during my career.”