African trypanosomes are masters of disguise. Delivered through bites from the tsetse fly, once inside a host these parasites quickly disguise their appearance in a process called antigenic variation, all to avoid detection — and no parasite does it better. 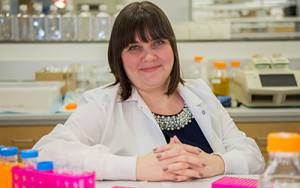 But how do organisms like trypanosomes, in their effort to colonize an inhospitable environment, regulate their genes and fool an animal that doesn’t want them there? That is the crux of Galadriel Hovel-Miner’s research.

Hovel-Miner, Ph.D., assistant professor of microbiology, immunology, and tropical medicine, opened her lab at the George Washington University (GW) School of Medicine and Health Sciences (SMHS) in December 2015. Her goal was to uncover the genetics behind a parasite’s ability to infect its host, and attribute those genes to their function. Doing so could expose gaps in the parasite’s defenses, leading to future targeted therapeutics. When it comes to trypanosomes, Hovel-Miner notes, that goal is a little daunting; so far, more than 60 percent of the genome remains a mystery.

Trypanosomes thrive in sub-Saharan Africa and spread African sleeping sickness. Ultimately, the trypanosomes’ genetic shroud enables them to slip across the blood-brain barrier undetected, where they enter the central nervous system. In the late stages of the disease, infected humans and other animals lose their sleep pattern; they sleep all day and are awake all night. The sleeping sickness itself, explains Hovel-Miner, is the end stage of the disease, caused by brain damage. The illness not only affects thousands of people living in sub-Saharan Africa, but also lays waste to livestock, financially devastating already poverty-stricken regions.

In addition to the human suffering the parasites create, Hovel-Miner says there are two other reasons her lab is interested in trypanosomes: They are the textbook parasite for antigenic variation, and their method of disguise is unique, accomplished by shuffling genes around in the genome.

That gene shuffling is perhaps one of the most intriguing aspects of her work, says Hovel-Miner. Trypanosomes, to perform antigenic variation, have only one gene expressed, or turned on, at a time. Unlike other pathogens that may have just a few antigenic genes at their disposal, trypanosomes have more than 2,000 cloaks with which to shroud their identity.

Normally, in a mammalian genome, moving the genes around would be very dangerous, she adds. “It’s something you pretty much want to do only when you’re an egg and a sperm coming together to make a new person or animal, a genetically unique one. A lot of times moving things around in the genome … can result in genetic disorders and cancers. These are the kinds of actions that cause genetic damage, which can result in disease,” she explains.

Understanding how trypanosomes efficiently move a silent gene from one position in the genome to become active in another position without incurring extra damage would open doors to an even better grasp not only of trypanosomes’ use of antigenic variation, but also of the genetics associated with human disease overall, Hovel-Miner says.

Although currently many stages away from the long-term goal of having a testable drug, Hovel-Miner hopes to find a better treatment for the disease that would inhibit the growth of the trypanosome.

“There are drugs, but there are only a limited number of them, and while they’re fairly effective, they’re also highly toxic. There aren’t very many of them, so drug resistance is a threat, and any resistance could be a real problem,” she says.

To learn more about the parasites’ genes, Hovel-Miner employs a genetic tool known as a “whole genome gain-of-function library.”

“This is a library of every gene in the trypanosome genome that we can turn on when we want to. So we put all the genes that we have under our control into a population of cells, we treat the cells with a condition, and then we see what genes are present post-treatment,” she explains.

Lab members are also modifying genes in the organism, as well as looking at how the genes of the trypanosome move through the genome.

“We know that [gene shuffling] begins with a DNA break, so we can look at how DNA breaks form and, following the formation of a DNA break, [examine] how things shuffle,” Hovel-Miner adds. “It now looks like some of this is associated with cell division and cell division defects. We’re starting to [look closely at] how the cells divide, because our data suggest that it’s connected.”