Scrubbing In on the Small Screen

For the past 10 seasons, TV viewers have watched as surgical resident, and now surgical attending physician, Meredith Grey makes her rounds at Grey Sloan Memorial Hospital, diagnosing patients and deciding whether they require surgery. From there, it’s into the operating room, where the real drama unfolds. In the midst of all this chaos, Grey must perform under pressure while enduring long hours and little sleep and balancing her personal and professional life. 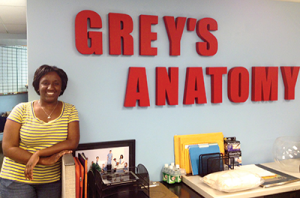 OK, maybe it only happens that way in Hollywood, but Hope Jackson, M.D. ’09, can certainly relate to Grey’s struggle to achieve personal satisfaction and professional success in medicine. Jackson, a PGY5 resident in the surgery program at GW’s School of Medicine and Health Sciences (SMHS), has always had a passion for medicine and media. “For me, connecting media and medicine is all about finding ways to disseminate positive and accurate messages about leading healthy lives to children and adults,” Jackson says. That drive and ambition would lead her to the set of the award-winning television series as a medical consultant.

When Jackson was a third-year medical student, she met emergency medicine physician Zoanne Clack, M.D., M.P.H., who at the time was also a medical writer for Grey’s Anatomy, at a medical conference in New York. Clack described how she was able to pair her enthusiasm for media and her training in medicine into a successful career. At the time, Jackson had not determined what medical specialty she wanted to pursue. Clack suggested Jackson first pinpoint what she wanted to do in medicine and encouraged her to keep in touch.

It was during a research year as a surgical resident that Jackson saw an opportunity to pursue all of her interests, not just in medicine but also in health care and how it’s portrayed in the media. Jackson reconnected with Clack. “I felt that my experiences as a surgical resident could contribute a lot to the show,” she recalls. Clack told Jackson that, despite nearing the close of its ninth season, the show had never had an actual surgical resident on set. “I had an interview with the show’s team, and the rest is history.”

Jackson packed her bags and flew to Los Angeles and the set of Grey’s Anatomy. For the next two months, she worked alongside the cast and crew, learning how medicine could be used to tell creative, powerful, and sometimes humorous stories.

Paired with the on-set medical advisor, Jackson experienced the full gamut of television production, from table reads to set creation, where directors and producers transform a typical Hollywood set into an operating room or doctor’s office; and finally to the rehearsals, where she watched as the actors read through the script before taping the finale.

“I think this field is a really unique opportunity for physicians to play a part in how health information is distributed to the public,” she says. “Moving forward I’d like to expand my work in medical correspondence to include not just the entertainment industry, but also national and local news.”

For Jackson, one of the most exciting aspects was “working with the actors one-on-one, helping them pronounce medical terms and teaching them how to use their hands in certain scenes to make the operation look as realistic as possible,” she says. “I helped the writers make edits to medical terminology and the procedures used, watched the episode being filmed in its entirety, and saw what happens in post-production before a show airs.”

Once the season-nine finale wrapped, the writers immediately began working on season 10. Jackson was allowed to participate in the writer’s room discussion and share her experiences in surgery with the writers and producers. “I was an in-person medical dictionary for the writers,” she jokes.

Jackson always wanted to participate in medical communications. “I think this field is a really unique opportunity for physicians to play a part in how health information is distributed to the public,” she says. “Moving forward I’d like to expand my work in medical correspondence to include not just the entertainment industry, but also national and local news.”

For Jackson, the experience “was an amazing opportunity to work with a team committed to making sure the medicine included was accurate and, most importantly, understandable.”

In an effort to extend the opportunity for other surgical residents to serve as medical consultants on Grey’s Anatomy, Jackson and her mentor Clack helped establish the Grey’s Anatomy Medical Communications Fellowship. During a three-month medical communications fellowship, residents will work under the direction of Clack, executive producers, and showrunner Shonda Rhimes at Grey’s, as well as conduct translational research at Hollywood, Health & Society at the University of Southern California’s Norman Lear Center. The post is open to individuals who have completed at least two postdoctoral years in an accredited surgical training program.

A longtime fan of the show, Jackson says she will always be grateful to the cast and crew of Grey’s Anatomy for her extremely unusual experience. During her time in Los Angeles, she says, “I gained invaluable experience in medical writing, hospital set design, editing, and production that I look forward to expanding upon in the future.”