Quality is key for Lynt B. Johnson, MD, MBA. It’s there in his dedicated 25 years as a pancreatic and liver surgeon, in his expectations for the future doctors he teaches, and in the name of the new institute for which he is the executive director: The George Washington University (GW) Liver and Pancreas Institute for Quality (LPIQ). 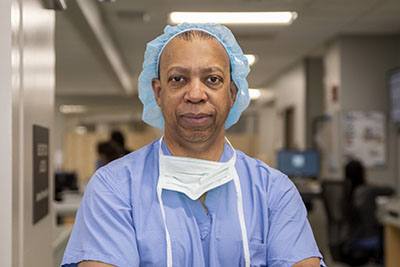 Johnson arrived at the GW Medical Faculty Associates only a little more than a year ago, but sitting at his desk on a chilly January day, he has a crystal-clear vision for the future of LPIQ. “What I have been very successful at is building strong programs. Not only do I want to build a great program here, but I also want it to be recognized for the quality of the work we do. It’s not just a ‘center’ — we put ‘quality’ in the name because that’s what we want to represent,” he says. “We want to be on the cutting edge for all the innovative treatments and newest therapies that become available, and hopefully we’ll originate some of those treatments here on campus.” Johnson, who serves as professor of surgery at the GW School of Medicine and Health Sciences, became interested in the medical field at a very young age, around 9, in fact. He lost his grandmother to what at the time he was told was “yellow jaundice.” The loss had a big impact on him. It pushed him to learn more about medicine, about what causes people to get sick.

Years later, when he started his career, Johnson discovered the real reason for his grandmother’s passing: gallbladder cancer. “I’m sure subliminally my career path being in liver and pancreas disease was rooted from that beginning,” he says. As someone who is always up for a challenge, Johnson says he found the unique and complicated nature of the liver and pancreas appealing. One of the few organs that can regenerate itself, the liver is the metabolic center of the body; it’s the factory, Johnson explains. “A lot of your proteins and clotting factors and metabolism of toxins begin in the liver, so it controls a lot of different processes. … And for years it was one of the more challenging organs to operate on, as well as to do a transplant of,” he says. That also meant the large incisions needed for a liver transplant were the opposite of where the medical field was heading as Johnson was starting his career.

Minimally invasive procedures were the innovation of the day, but not for liver transplants. The field did catch up eventually, in large part, Johnson says, because of “the altruistic nature of women.” Live liver donor transplants were increasing, and women were the ones stepping up as donors. 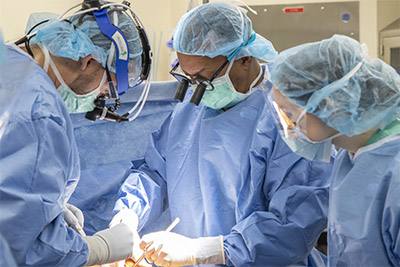 “We started to realize that they’re already doing an incredibly lifesaving task; what can we do to improve the process? And the idea was that we could do it through smaller incisions and it would be beneficial to everyone,” Johnson explains. “That’s how I became interested in minimally invasive surgery, because of the live donors.”

The liver is challenging, but the pancreas has complications of its own. Currently, surgery is the only option for addressing pancreatic cancer, which is one of the most deadly forms of the disease. The challenges are twofold. First, chemotherapy is often ineffective, because it cannot penetrate the scar tissue the cancer creates, and, second, there are few early diagnostic markers for the disease.

However, innovation in the last four to five years has led to an increase in the number of patients eligible for surgery, Johnson notes. When the disease spreads, it can invade the blood vessels around the pancreas, but now surgeons are able to go in and not only cut out the cancer, but also cut it out of the blood vessels and put them back together. And, like so many other areas of surgery, pancreatic disease is getting the minimally invasive treatment, done through laparoscopic-assisted approaches, leading to a much smaller incision, less pain, and a faster recovery. Challenges aside, when asked what he enjoys most about the path to which he’s dedicated his life, Johnson answers instantly: the anniversary cards he receives from patients. “It’s the patients and the ability to have an impact on their lives, on their families,” he says. “That is the draw to come in every morning.”