“Teaching is about communicating something that is complicated in a way that students can embrace and get excited about — and that excites me,” explains Patricia Latham, M.D., Ed.D., professor of pathology at the GW School of Medicine and Health Sciences (SMHS). 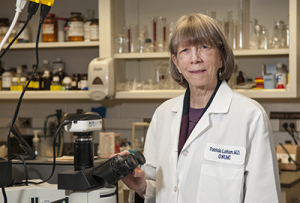 Latham finds herself in a unique position as the inaugural faculty member to hold The Frank N. Miller, M.D. Distinguished Teaching Professorship. She is receiving an endowed title named for a professor she knew well, and so she understands the legacy she’s been charged to maintain. “It’s extremely gratifying to receive this honor because I knew Dr. Miller,” she says. “He was inspirational to his students and people that knew him as an instructor, and he was so giving of his time and energy.”

Latham recalls Miller’s excitement for teaching as infectious. “I loved working with him because you could see his passion and commitment for teaching and for his students. This was reflected in the way he taught and students responded to it because they wanted to be a part of it.”

The endowment, established through numerous donations and completed by SMHS alumna Diane Perrine Luckmann, M.D. ’59, honors the career of Miller, M.D. ’48, B.S. ’43, Professor Emeritus of Pathology at SMHS, who passed away on April 24, 2013. For more than 40 years, Miller was a fixture in the SMHS community, helping to mold the careers of future physicians, including Luckmann. In his role as dean of students and curricular affairs from 1966 to 1973, Miller made it his mission to increase the number of women entering medical school, which he successfully did during those years. He also served as chair of the Department of Pathology from 1974 to 1977.

“I’m so proud of my father and his legacy,” says Miller’s daughter Catherine Sluder, manager of the Bloedorn Technology Center in GW’s Himmelfarb Health Sciences Library. “He would want to be remembered as a devoted teacher and mentor to his students,” she says, adding that “he was committed to giving them a solid foundation in pathology, but he did more than that. He incorporated medical humanities into his lectures.”

Latham arrived at GW in 1991 and recalls that one of the strengths of SMHS’s Pathology Department, spearheaded by Miller, was an emphasis on quality education. “The department had a major commitment to education, which was as important as any other responsibility in the department,” she recalls.

“Dr. Miller was a role model. As the director of the pathology course, he not only set it up to meet the requirements, but also addressed challenges faced by medical students, providing a very solid base in pathology.”

To honor Miller’s legacy, Latham will continue to make “research, service, and education the cornerstones of this department, as they were when Dr. Miller was chair.”

Before Miller passed away, Sluder was able to tell her father about the endowed professorship. “He was in decline and not always fully aware or responsive, but when I told him the news he actually smiled, so he understood.”