A Medical Mission as a Third-Year Medical Student Provided David Rapp, MD ’01, with a Global Perspective on Health Care

There are those who talk about what needs to be done, and those who just do it. It’s safe to say David Rapp, MD ’01, falls into the “just do it” column. 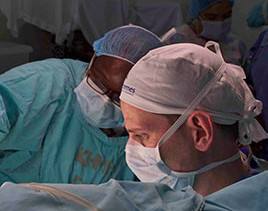 When he entered his third year of medical school at the George Washington University (GW) School of Medicine and Health Sciences, Rapp got his first glimpse of the desperate need for medical care around the world by participating in a medical mission as part of his MD curriculum. “I went to Honduras for a week and it was a transformative experience.”

That first trip left an indelible impression on Rapp, who today serves as an associate professor of urology at the University of Virginia. Ultimately, it would prompt him to act on the need he witnessed during that medical mission, forming his own nonprofit medical philanthropic organization, Global Surgical Expedition (GSE).

“Once you’ve taken one trip, you’re committed forever,” says Rapp. “I always knew that I wanted to [travel and work in underserved regions], but I also wanted to make a bigger impact.

“My mother is a storyteller and she taught me the power of stories,” Rapp explains. “So, I wanted to use stories to help inspire other physicians and health care professionals to join the global effort to treat surgical illness.” From its beginning, Rapp has ensured that GSE lives this mission, offering a catalog of inspirational stories from patients, health care volunteers, and GSE trips through videos and blogs posted on the nonprofit’s website.

As a high school student, Rapp developed a serious interest in language, particularly Spanish. He even majored in Spanish as an undergraduate at the University of Virginia. Medicine, however, was always his end goal. Because he came from a family of physicians — both his father and grandfather were doctors, and his brother also practices medicine — health care was a big part of his world view from an early age.

Rapp’s grandfather was a primary care physician in rural Illinois, and Rapp recalls visiting the clinic where he worked, “learning how a stethoscope worked, playing with the centrifuges. Those things were really exciting. I think it was always something I envisioned doing.”

Those diverse interests and zeal for language laid an ideal foundation for Rapp’s future international work. When it came time to apply for medical school, Rapp says, GW topped the list. “I was obviously attracted to the quality of the education and the school itself, but I was also interested in the community in and around GW. There is a real international flair. GW is known for being a hub of international relations and work within Washington, D.C.”

Following graduation from GW, the completion of his residency at the University of Chicago, and a fellowship at Virginia Mason Medical Center, Rapp sought out more global health opportunities. The young urologic surgeon visited Belize — a tiny nation perched along the eastern edge of Central America, bordered by Mexico, Guatemala, and the Caribbean Sea — and discovered a region in desperate need of his skills.

"[I] wanted to use stories to help inspire other physicians and health care professionals to join the global effort to treat surgical illness.”

“I expected on my first trip to go and perform a number of very complicated surgeries,” recalls Rapp, who specializes in reconstructive urological surgery. “When I got there, what I found was a lack of urologic care, often very basic care that we take for granted in the United States, that was resulting in lifelong disability or even death [in Belize].”

Common problems such as kidney stones, which elsewhere are treated very simply, he explains, plagued the local population, leaving patients on dialysis or even costing them their lives. “It really motivated me to set up a hub and focus our efforts down there, because I knew that we could make such a big difference.”

Rapp and Tim Bradford, MD, a partner at the Virginia Urology Center who joined him on the trip, returned to the United States committed to do even more. In 2012, they founded GSE, providing surgical care and boosting regional health care capacity by offering equipment and training to local surgeons. Over the seven years the nonprofit has been organizing missions, GSE has grown. It now sends out five surgical teams annually — to not only Central America, but also Africa. Together, GSE volunteers have performed more than 300 surgeries and treated more than 750 patients afflicted by cancer, fistula, kidney stones, urinary blockage, and other devastating illnesses.

Beyond the life-restoring surgeries performed during each trip, the sustained impact from training local physicians is the key contribution of GSE — and it’s a big part of what drives Rapp.

“Sometimes education is as meaningful as doing a surgery,” he says. “If you can educate local surgeons and teach them how to perform a particular procedure, they can each do 100 of those surgeries in a year, while I can only do a few of them while I’m there.

“It’s those trips that truly reinforce the privilege that it is to be a physician,” Rapp continues. “You look back at the years of schooling and training, and it’s trips like these [that make] you realize it was worth it.”